James Gosling and his team started working on JAVA, initially named as the OAK in the Early 1990s. The first stable version was Java Alpha & Beta was released in 1995. Java bagged one of the ten best products awards by time magazine in the same year. Java versions were rolled out continuously. Twenty-five years later, the latest version Java SE 14, was released in March 2020.

Let’s look at some numbers.

The average salary of a Java developer is more than 100000 USD.

In India, even an entry-level Java developer gets paid around 4LPA.

As per the TIOBE 2020 Popularity Index, Java is the most popular and preferred programming language across the world.

According to PYPL (PopularitY of Programming Language), Java is the second most popular programming language, next to python. 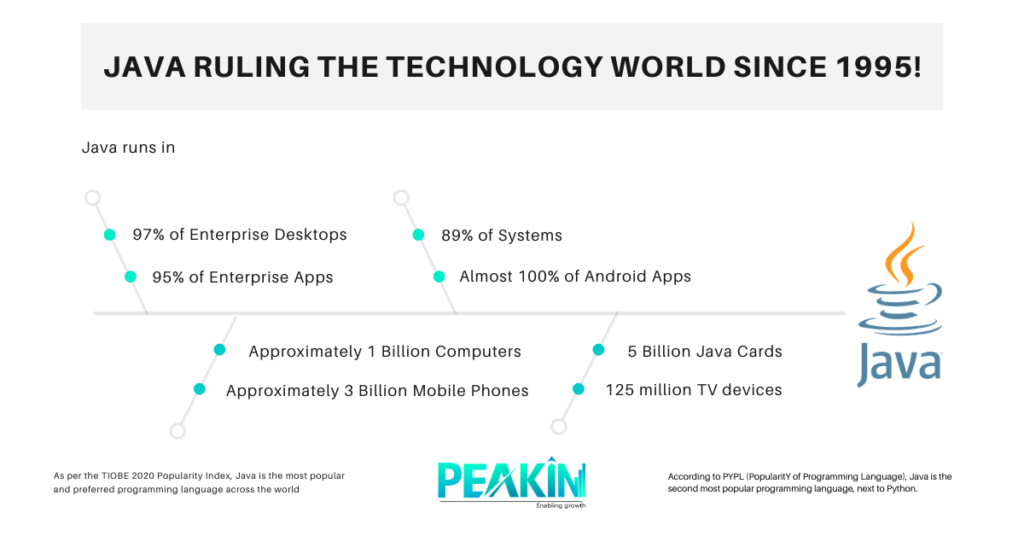 But why is Java so popular?

“Write Once & Run Anywhere” is the motto of the Java programming language. Java lets developers build an application that can run across any operating system or server. All you need is JRE (Java Runtime Environment) – Java application can run in any desktop or mobile platform.

Java has well-maintained documentation. There is a detailed guide available for every single problem that you may encounter while using java.

Java is an object-oriented programming language, so the development is simple.  Java supports modularity and easy to approach programming code. Readability is high when coded in Java. Java is easy to learn – once you learn it, the same syntax, patterns, tools can be implied in other languages as well.

JVM (Java virtual machine) JIT (just in time) compiler is very fast and it significantly enhances the performance of Java applications. Even other languages like groovy, Scala uses JVM as their execution platform.

Java is highly scalable. Developers can develop an application that can be easily customized across platforms. Google recommends developers to use Java for building android apps.

Java language and runtime systems are built-in with safety features. It is a difficult task to maliciously invade java applications.

It is easy to reuse common codes in Java. Java being an object-oriented programming language, inheritance makes the coding simple, efficient and effective.

With a new release every six months, Java is evolving continuously and at a faster rate, accommodating all the needs of developers and innovations.

There is a new release, every six months. So, what happens to the code that was written in the older version? Well, Java is backwards compatible. The code written in one version will run perfectly fine in all newer versions without any modification. 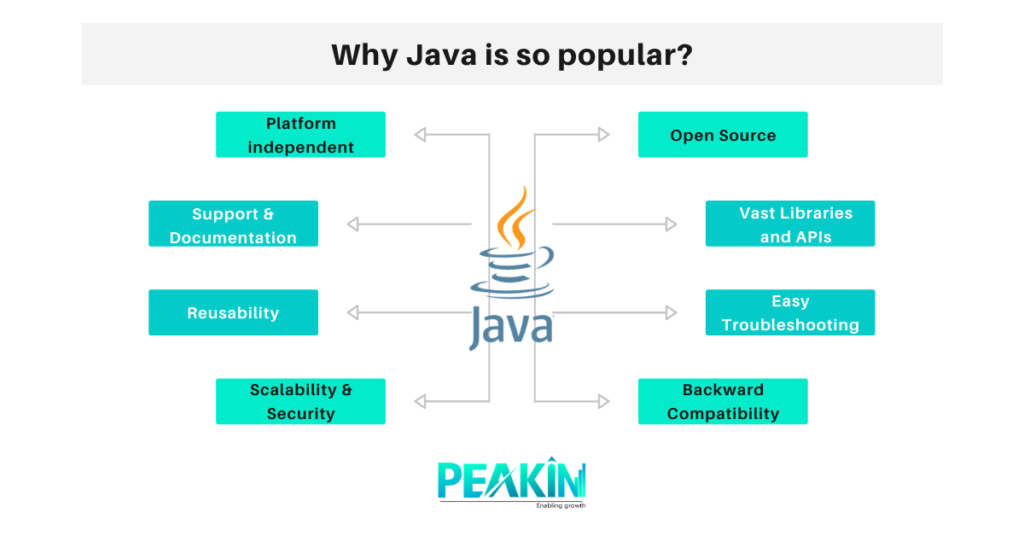 Where Java is used?

Java is highly portable and that makes it a perfect choice for IoT devices. For IoT devices, interoperability is very crucial as it works with a cluster of technologies like cloud computing, big data, hardware devices, sensors. Java fits the bill perfectly as it is interoperable. Extensive built-in libraries in Java helps to have complete control over the embedded code. Java can work in any computing environment smoothly and securely.

Even in Blockchain technology, java is widely used.

Web3j and HyperLedger Fabric are the most widely used Java frameworks in Blockchain. Java, with its flexibility and security, will increase the demand of Java developers in the Blockchain technology.

Even in 2020, Java is worth learning and it is projected to be a popular language in 2050. Java is an incredibly fast, reliable and secure programming language. Many won’t disagree, Java is here to stay!

If you want to learn Java, we have two extensive courses – Core Java programming & Advanced java programming. Get in touch with us to enrol.